As I continue to explore little-known local traditions of household Daoist ritual, this article is based on a brief section of my book In search of the folk Daoists of north China (pp.101–105). I haven’t been to Changwu, so (as with several sites in the book) this is more of an invitation for people to go and do some serious fieldwork there. Here I supplement material from my book with some more recent online sources.

The Anthology
The brief account in my book is itself largely based on a report in the Anthology of folk music of the Chinese peoples (Zhongguo minzu minjian yinyue jicheng, henceforth “the Anthology”). I assessed this monumental work documenting and transcribing local genres of traditional music in a lengthy article:

“Reading between the lines: reflections on the massive Anthology of folk music of the Chinese peoples”, Ethnomusicology 47.3 (2003): 287–337;

It is all to easy to criticize the limitations of the Anthology. But if one learns to read between the lines, the amount of local material for a broad spectrum of music-making is truly amazing—bearing in mind the discomforts and limitations fieldworkers suffered, and the problems of studying folk and especially ritual music in modern China. Given the ideological heritage, and despite the Anthology’s many shortcomings, it contains far more data on local customs than we have a right to expect. it contains a vast amount of material otherwise unavailable, offering outside scholars a unique entry-point into regional traditions: consulting it (along with the xianzhi county gazetteers) will be indispensable preparation for our own fieldwork.

The Changwu Daoists
Among the separate Anthology volumes for folksong, narrative-singing, opera, instrumental music, and dance, “religious music” is usually allocated a section in the volumes on instrumental music, but in this case it is in the Shaanxi volumes of the Anthology of narrative-singing music that we find an exceptionally detailed section on the funeral liturgy of household Daoist ritual specialists in Changwu 长武 county (in west-central Shaanxi, at the border with eastern Gansu). [1] As with Shanxi province just east, little material has surfaced from the central regions of Shaanxi—so these clues are all the more valuable.

The material on the Changwu Daoists is based on the Wen lineage, notably Wen Jixiang 文吉祥 (1903–98) and Wen Donglai 文東來 (b. c1930), from Fangzhuang 方庄 village of Penggong district. Working in a group of around seven, they are described as belonging to the Heavenly Masters Orthodox Unity (Tianshi Zhengyi) tradition.

But from their costumes, hats, and the style of their ritual manuals, I now suspect this may be another household Complete Perfection (Quanzhen) tradition, as in Shuozhou. Though I have suggested (there, and in my book) that nominal affiliation may not be so significant, could this be another case where scholars have glossed “household” as “Orthodox Unity”? This begins to look like a worrying trend. Indeed, tucked away in Zhang Xingyun’s book (see n.1 below: p.176) is a tiny mention that they belong to the Huashan branch (of Complete Perfection Daoism)!

Anyway, the Wen lineage claimed a family tradition dating back to the 18th century. As we found in Shuozhou, there were close links between temple and household priests: twice, in Qianlong and Daoguang eras, their ancestors had passed examinations for official Daoist rank (kaoqu daoguan zhixian 考取道官職銜), later setting up as a household group.

Another Daoist consulted by Anthology collectors, Wang Zhixi 王志壐 (1903–89), was a disciple of Wen Huanzhang 文煥章 (1905–34), Wen Donglai’s father, though he is said to have taken part in the latter’s group only from the 1950s. By 2007, when local cultural authorities promoted the “genre” as part of the Intangible Cultural Heritage project for Shaanxi, they claimed that only one group was still working; as ever, this claim may serve to justify the urgency of the project, and indeed may derive from a lack of more recent fieldwork.

A “scripture hall” (song)jingtang (誦)經堂 is set up—apparently like we found in Yanggao (my book, pp.27–8), a room in which the Daoists prepare and rest, well away from the soul hall. In north Shanxi the ritual aspects of this room have become much simplified since the 1980s, but here it is elaborately decorated with ritual hangings and is a site of ritual activity. It consists of front and rear altars (qiantan 前壇, houtan 後壇). At the front altar are hung images of Yuhuang, Guanyin, and Dizang; at the rear altar, the Santian jiaozhu 三天教主 (Yuqing yuanshi tianzun, Shangqing lingbao tianzun, and Taiqing daode tianzun).

In the courtyard of the mortuary site, or in a suitably large space outside, heavenly and yin underworld altars (tiantan 天壇, yintan 陰壇) are set up. The heavenly altar is either a star altar (xingtan 星壇, or civil altar wentan 文壇) for qingjiao rituals, or a thunder altar (leitan 雷壇, or martial altar wutan 武壇) for mortuary rituals (for which the star altar may also be constructed). The yin altar is a platform for Dispensing Food (shishi tai 施食台) or ritual platform (fatai 法台).

Their jiao are further classified by length: chenggui 成規 jiao lasting four days and three nights, qiluo 起落 jiao over three days and two nights, and zhanling 站靈 jiao lasting one and a half days. Though it may be that only the latter has been common in recent decades, the account lists the full version (see Table)—as long as we don’t confuse prescription with description.

Unusually (and admirably), the Anthology material concentrates on the vocal liturgy, but melodic instrumental music is also played: guan oboe and di flute are mentioned, so one supposes it was a branch of the northern shengguan ritual tradition.

Throughout Shaanxi, apart from vocal liturgy and ritual percussion, most ritual groups have added a “small suona” shawm to the classic shengguan ensemble.

As an interim measure, we may compare some of the ritual segments below with those of the Daoists in Yanggao, Shuozhou, and further afield.

Conclusion
Ritual life like this cries out for detailed fieldwork. One would hope to learn more about any other groups in the vicinity, not to mention documenting change over a lifetime. With so much of our knowledge based on research in south China, such spadework also augments our ritual vocabulary for the north. These clues should lead us westward towards Gansu, perhaps the most fertile ground for household Daoist ritual in north China (In search of the folk Daoists, ch.6).

[1] Zhongguo quyi yinyue jicheng, Shaanxi juan, Appendix pp.1559–1684 (text 1559–65, transcriptions 1566–1683, biographies 1684). The textual material (apparently by Hui Xinsheng 惠新升 and Zhang Xingyun 张兴运) is brief but useful, and is illuminated by well-annotated transcriptions of vocal liturgy. Zhang Xingyun et al., Zongjiao yinyue zonglan (Shaanxi lüyou chubanshe, c2001) is a revised edition in book form, with additional notes on the vocal passages, as well as further sections on other lay genres of vocal liturgy in Xianyang and Xingping. The Shaanxi vols. of the Anthology of folk instrumental music of the Chinese peoples (Zhongguo minzu minjian qiyuequ jicheng) also mention nearby Binxian and Xunyi counties as having ritual traditions (1327–8, 961–1201). Recent online sources such as https://kknews.cc/culture/p5rz68.html, https://freewechat.com/a/MzIyOTA5MzEyOA==/2653293971/3/?rss are still less than ideal.

[3] guoguan: for child-protection rituals including baosuo Hanging the Locket, cf. my Ritual and music of north China, vol.2: Shaanbei, Part Two, and the DVD Chinese Shadows. 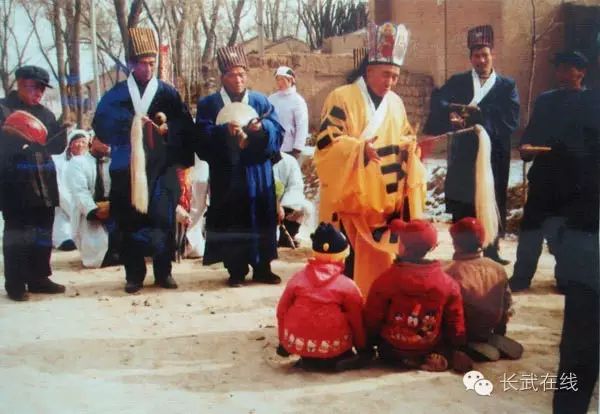