I’ve finally got round to reading Richard Taruskin properly. 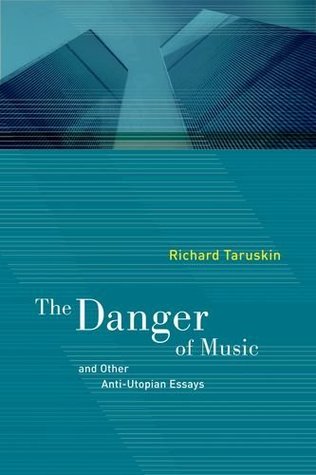 is most invigorating—a real shot in the arm. The reader just has to share Taruskin’s own delight at his provocative stance. As John Butt observes,

Even if one disagreed with every word of the book, the writing is always a joy to read.

Now that we have had Beethoven lite from Christopher Hogwood and Brahms lite from John Eliot Gardiner, and even Wagner lite from Mr Norrington, it was inevitable that someone would bring us Stravinsky lite, even a lite “Rite”.

Many topics are worth exploring, but I’m going to start with Taruskin’s seminal ideas on early music. He treats the subject more expansively in his classic book Text and act, reviewed with immense wisdom by John Butt here—indeed, here’s some further essential reading:

But for now I will ponder some of Taruskin’s vignettes in The danger of music.

Simply stated, he links HIP (historically informed performance) with modernism, placing it firmly within the context of our contemporary culture.

An American composer recently complained [sic—SJ] that the so-called authenticity movement was “the one musical activity these days which has the passion of the new.”

[…] Now “early music”, as I suppose most people must realize by now, does not merely mean old music in this context, but a general philosophy of performing music.
[…]
What “early music” performers are doing, then, is performing Bach, Mozart, or Beethoven as if they were Stravinsky, Babbitt, or Glass.

Thus “early music”, though its pretension to “authenticity” is easily refuted, is nonetheless a profoundly authentic expression of our time—for better or worse. That, rather than its pretensions, is what gives it its vitality and its viability, and why its present project of encroachment on later and later repertories is destined to continue and succeed. (pp.16–17)

The early music movement was indeed part of new musical explorations, as I noted in the overlap of its exponents with contemporary music.

I take Taruskin’s point—though I would challenge his simple depiction of the style as “objective”, “streamlined, geometric, and dehumanized” (cf. Alternative Bach). It’s far from monolithic. Some of the most admired early-music conductors (as opposed to the “semi-conductors” of Norman Lebrecht’s exposé The maestro myth) [1] use the HIP style in such a way as to give full rein to the romantic expressive tendencies of the baroque. Explicitly or not, such conductors, as well as the performers, may evoke not only Stravinsky, but also Mahler, Michel Legrand, or Tom and Jerry. Whether they do or not, (modern) audiences may hear such flavours, and that too is a major aspect of its success. It’s our romanticism, not that of the 1930s. All that only supports Taruskin’s argument.

However convincing, his point may read to some as sophistry—not exactly damning with faint praise, but perhaps pulling the rug from under the HIPsters’ putative sandalled feet. Still, I don’t think they will be too offended by the idea.

One of the most fascinating recordings of the year just past, and one of the most important. Which is not necessarily to imply that the performances it preserves are any good.
[…]
It is all high noon of the intellect and sharp commentary—as un-Wagnerian as could be, but a blazing manifesto of the twentieth century’s drastic rejection of swirling mists and Germanic inwardness. No Wagner lover will ever listen to Mr Norrington’s magnificent subversion for pleasure. The pleasure is for the Wagner hater who lurks within each of us. The dread Teutonic forest beast is at last defanged. The Enlightenment strikes back. This disc belongs in every home.

Maestro-baiting at its best! It’ll serve him right if Norrington plucks out that last sentence to use as glowing publicity.

John Eliot Gardiner’s Schumann recordings get the signature Taruskin going-over too, in “Let’s rescue poor Schumann from his rescuers” (pp.124–8). Citing an illustrious pedigree (Mahler, Szell, Bernstein), he dates any “rescue” attempt right back to Brahms, and sees the claims of the modern maestros merely as “seeking authority (codename: “authenticity”) and privilege.”

To me this seems partly the fault of the (modern!) market. These days you can’t just come along and play some good music well—you need a sales pitch. Conductors can hardly demur, although a fictitious one tries to in the clip here.

The “false patina” Mr Gardiner deplores was the historical reality. His attempt to scrub it away could not be more anachronistic.

But Taruskin then goes on, archly:

This really should not bother anyone. Remaking the classics is the only way to keep them alive.

He does have less sly words of praise for a CD of Mahler and Schoenberg from Kenneth Slowik and the Smithsonian Chamber Players (pp.95–7). Noting that they stop short at reproducing what may sound to us the “sloppy, not expressive” uncoordinated slides of Mengelberg’s 1926 Concertgebouw orchestra, he comments,

If all that a modern performer can come up with is a copy of an old record, then we are only dealing (as Bernard Sherman, a sharp observer of the early music scene, likes to say) with a sedate version of Elvis impersonation. Mr Slowik’s performance is his performance, not Mengelberg’s. But Mengelberg’s example—portamento, [2] “hairpin” dynamics, elastic beat, and all—has spurred him and his players into a rendition far more shapely and eloquent, and more imbued with personal initiative, than our complacent cleaner-uppers have dreamt of in their note-bound philosophy.

(and if you find that too fast, just try contrasting it with the tempi in his 1939 Matthew Passion! I’m most grateful to Prof. Taruskin for enabling me to appreciate this performance…). See also Mengelberg’s Mahler 4.

In the final chapter, “Setting limits” (notably pp.447–51) he reiterates some of his main points:

My musical and musicological colleagues seemed unable to hear what I was really saying when I said that their ideas of historical performance practice, on which the claim of authenticity was based, derived from a selective reading of history in the service of a modern—or, more strongly, a modernist—ideology. They thought I was claiming that what they were doing was incorrect or misguided or deceitful; but what I meant to imply (and even said outright on occasion) was that their accomplishment was actually far more important and authentic than they claimed or even realized, since that made them the authentic voice of their time, which was our time.

[SJ: Keeping up at the back there?]

I only wished they would call their accomplishment by its right name, because that might have freed them to go further and be bolder, and emancipate themselves even more completely from unthinking obeisance to received wisdom and constraint. But somehow they heard me saying the opposite, and I acquired a reputation as an enemy of historical performance when I had meant to be its best (or at least its truest) friend. A whole literature had grown up in the wake of this misunderstanding.

The claim of “privilege” to which proponents of “authenticity” felt themselves entitled by virtue of their superior knowledge (or so they claimed) of composers’ intentions,

… my strictures were not addressed only to this particular claim of privilege, but to any and all such claims that sought to circumvent the judgments and preferences of listeners—that is, those most immediately affected by performance decisions.

He cites approvingly a review of his work:

“His [Taruskin’s ] complaint is that authenticists, like other ideologues, try to discredit competing interpretations as “incorrect”, or, indeed, incompetent, when the proper focus should be on whether the performances are more or less enjoyable and artistically effective.”

Referring to my own experience from the shop floor (or coal face): by the time I entered the scene in the early 1980s, I don’t recall so many fundamentalists: most of us, just like our counterparts in “straight” music, were just trying to find a clean concert shirt, decide if we needed to change a string, turn up for the gig, follow the bowings, and blend. At the same time, even after the initial excitement of discovery began to be diluted by routine, we all liked the sounds that our developing style produced, and did our best to put on a show that would move our (modern!) audiences. And even now there’s an energy and chiaroscuro about such performances that is rare in the “straight” scene.

If early-music performers had ever trumpeted the claim of “authenticity” (say, Reinhard Goebel, “Ayatollah of baroque”), then perhaps it was partly Taruskin’s rebukes that made them tone it down, even by the 1980s; but surely by the 21st century he overestimates the pride with which anyone flaunts the badge.

Pausing to enjoy this S-Simon Rattle story, I think too of the Bach films I cited here, masterpieces partly by virtue of their acceptance of the film-makers’ own “modernity”.

We may do without electricity, and draw our water from the well, but somewhere along the line we will inevitably belong to our own times—even by harking back to the baroque, which no-one did in the baroque. But again, the early music scene isn’t monolithic. As I observed in my post on the late great Francis Baines,

From the late 1970s, as the early music world became ever more polished, fragrant, and marketable—the inevitable transition from “knit your own yogurt” to Chanel No. 5…

John Butt’s review of Text and act also homes in on a crucial point that resonates strongly with my comments on Daoist ritual studies:

Performance, of any kind, should be an act and not reduced to the status of a text. Performance is significant for its human component and not for its objective veracity.

I can’t say how many musicians in the HIP business read Taruskin, but I knew little more than the name. [3] From a quite unscientific survey, I surmise that the “homework” of most of my colleagues consisted mainly of learning new chamber repertoire, consulting the odd baroque treatise on ornamentation, seeking a suitable bow, even reading up on string gauges. Like household Daoists, I doubt if many musicians in many traditions read thoughtful reflections on our place in the societies in which we function—but apart from the stimulation it affords, it might make us (and anyone still critical of the movement) feel more relaxed about what we do.

For comments on this page, click here. For more Taruskin, see e.g. The right kind of spirituality?, What is serious music?!, and Korngold at the Proms.

[1] Not that Taruskin gives him an easy ride either: “sloppy but entertaining British muckraker”!

[2] How can I resist citing Hurwitz’s review of Norrington’s Mahler 9? “Curiously, although Norrington has no qualms about ignoring anything that Mahler wants at any given time, he tends to be generous with string portamento. This, combined with the lack of vibrato, generates the kind of allure we might find in a particularly wizened senior citizen dressed up like a teenage hooker.”

[3] I’m perhaps not so atypical as I may sound—I’ve read a lot more about Daoist ritual, China, and ethnography than about WAM; my involvement with the latter is mainly as a performer. Like Daoist ritual specialists and Bernard Bresslaw, “I just sort of… picked it up”.