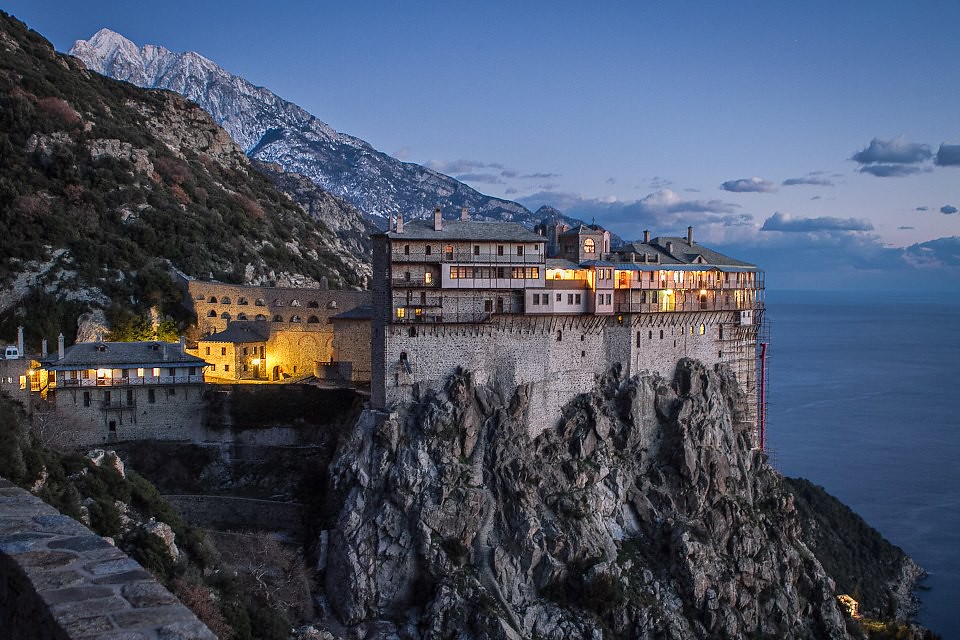 Having just naively queried the choices of heritage pundits,  I am further reminded of my 2011 visit to Mount Athos by the difficulty of savouring one’s meal in a fado club while concentration is justly demanded on the saudade of the singing.

Attending matins—lasting several hours—in a monastery high above the sea is magical. We make our way to the chapel in darkness, finding the doorway by a tiny glint of candlelight in the inner sanctum beyond. Thuribles fragrant, icons glowing, elusive shadows of black-robed bearded monks flitting past. I find a place in a high narrow wooden stall, ornately designed to deny comfort.

It was all stage-managed for maximum effect: the light of truth scattering the night of ignorance, the Holy Fathers hovering in the shadows, their faces reflecting the candle’s rays, while Christ gazed down from the heavens. Beyond the walls of the church lay the world, unseen, unknown, an immense and incomprehensible universe.

As we stand/lean/doze in our stalls, the incense, lugubrious chanting and deep singing are intoxicating. After an eon the first shafts of sunlight begin to illuminate the scene, the mosaics on the dome beginning to shine down on us.

Another candle was lit on the far side of the church and a second monk added his voice. The effect was dramatic. Suddenly there was a dialogue. The two melodies alternated, joined, drew apart, curled around each other like the tendrils of a vine (cf. Susan McClary on baroque trio sonatas). George was lulled into a state that resembled hallucination, where one sense entered his mind in the guise of another. Sound became colour. The smoke of incense, burning every day here for centuries, became his own memories. Past and present fused in a molten river of darkness and gilded flames.

For those who have witnessed Chinese temple rituals, attending an Orthodox ceremony will seem rather familiar—even down to the wooden semantron that calls people to prayer. The rhythmic swish of the thuribles may even remind us of the sepaye of the ashiq in Xinjiang. One might also compare scenes from Holy Week in Sardinia in Bernard Lortat-Jacob’s fine film.

Such a ritual also gives the motley crew of pilgrims a healthy appetite for a friendly reflective chat at the following meal in the trapeza refectory, over what one might expect to be a wealth of succulent local produce. Well, forget it—silence is rigorously imposed among the “diners”, while from a lectern a monk lugubriously intones a passage from the gospels; worse still, the food is both meagre and inexplicably inedible.

So the only “blessing” is that one has to wolf it all down in a considerable hurry—not so much Mediterranean “buon appetito” conviviality, delighting in the copious blessings of the earth that our Good Lord has bestowed; more a 1950s’ English embarrassment at this unfortunate necessity that confronts us.

That was inedible muck. And there wasn’t enough of it.

I’m not knocking Athos. OK, it’s not exactly at the forefront of gender equality, but the rituals, architecture, ancient glowing icons, tranquillity, and stunning scenery all make for an unforgettable experience—and even the meals are indeed a reflection of the world-view that we go there to absorb. Just don’t expect an urbane refined dining experience, that’s all.

A suitable penance for the UNESCO committee that elected “Mediterranean diet” for Intangible Cultural Heritage status might be to consign them to Mount Athos for a few days. That’ll sort ’em out. They will come down from the mountain with a healthy (sic) appetite for a deep-fried Mars bar.

7 thoughts on “Ritual, food, and chastisement”