Following the riches of Bach on Radio 3 and my recent survey: 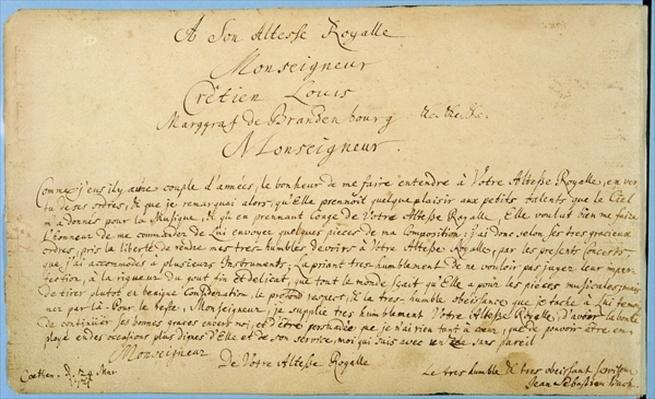 Bach’s letters to his patrons are a sad vignette on the sordid realities of working for them. Along with his unsolicited gift of the Brandenburg concertos to the Margrave of Brandenburg [“What does that even mean?”], he wrote this covering letter (in French, courtly language of the time), dated 24th March 1721:

Sure, we have to read such a letter in the context of the day, but it’s hard to beat for brown-nosing. Servants indeed— to cite Dennis in Monty Python and the Holy Grail,

… exploiting the workers! By hanging on to outdated imperialist dogma which perpetuates the economic and social differences in our society… We’re living in a dictatorship! A self-perpetuating autocracy, in which the working classes…

Didn’t know we had a king. I thought we were an autonomous collective.

And there’s no evidence that the Margrave even wrote back. Pah! I hope Bach told him where to stick it. He might have well as sent the concertos to Tweety McTangerine.

Bach had been happy at Cöthen, where Prince Leopold was an exceptionally musical patron—Bach’s need to seek new employment has been blamed on the Prince’s “airhead” new wife (typical). With the Margrave deaf to his appeal, Bach was soon to find a permanent haven in Leipzig—and the rest is geography. Even there his struggles with patrons continued.

Thing is, despite all such routine tedious scramblings, Bach never stopped creating a wealth of music that stands as a rebuke to all mundane concerns.

And so in imperial China—right down to today, as a chain of fawning operates from grass-roots performers to regional cadres to central pundits. Only with less magical results.

Dr S. Jones (available for weddings, bar mitzvahs, and screenings of my film Li Manshan: portrait of a folk Daoist)

4 thoughts on “Bach and patronage”