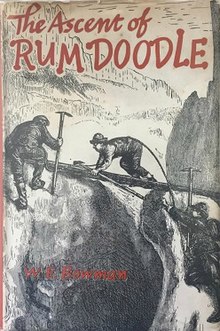 The ascent of Rum Doodle, a 1956 parody by W.E. Bowman, richly deserves a place in the illustrious roster of 1950s’ British satire, debunking heroic British imperial pretensions At A Time When It Was Neither Profitable Nor Popular—a predecessor of travel spoofs like Away from it all and Molvania, or the impressions of Ronnie Ancona.

It describes the misadventures of a motley crew of “mountaineers” of staggering, nay tottering, ineptitude, led by the stoic narrator Binder, as they attempt to climb the world’s highest peak in remote Yogistan.

The team includes Jungle, the route finder, always hopelessly lost, and the physician Prone, who succumbs to a never-ending series of ailments (for his backstory, see pp.70–72, among several touching tales). Constant, diplomat and linguist,

went into the native portion of the train to improve his knowledge of the language, but soon afterwards a riot broke out and he thought it advisable to retire. He explained that the natives were really friendly people of imperturbable dignity and cheerfulness, but they sometimes allowed themselves to be upset by trifles.[…]
They spoke together for several minutes, and a European onlooker might have been forgiven for concluding that they were quarrelling violently; but I told myself that this, no doubt, was the local idiom. […]
We passed through many villages, the inhabitants of which were invariably sullen and unfriendly, except when Constant made overtures, when they became hostile.

We were naturally all agog to catch sight of the Atrocious Snowman […] first seen by Thudd in 1928 near the summit of Raw Deedle.

It wore a loincloth and was talking to itself in Rudistani with a strong Birmingham accent.

The team, supplemented by cynical local porters, is spurred ever upward by their attempts to escape the inedible food of the expedition cook Pong. Copious “medicinal” champagne is quaffed, notably during the inevitable fall into a crevasse and the ensuing rescue attempt.

As Bill Bryson notes in his introduction to the 2001 edition, Rum Doodle earned only a niche following until the 1980s (and like Sir Henry at Rawlinson End, I missed it even then). It gradually became a cult, giving its name to hostelries in Kathmandu and Windermere (sic)—and even to mountains. As Bryson says, it’s one of the funniest books you will ever read.

2 thoughts on “The ascent of Rum Doodle”