My brilliant friend Paola Zannoni (who gave me such a wonderful image for that Bach cello prelude), far more “deep in the dream” of Chet Baker than I, has given me her own playlist. She and her brother Fabio inherited their passion for Chet from their father Enzo (1925–98, R.I.P.), an avid participant in the modest yet passionate jazz scene in Verona.

In March 1959 Chet was busted again in Harlem, spending four months in Rikers Island gaol. Soon after his release he was touring in Europe, and in October he recorded the iconic Chet Baker in Milan. Not long after Paola was born, her father went to see Chet’s new film Urlatori alla sbarra (see below) in Milan, hearing him live there too.

As Paola notes, 1950s’ Milan was still a world of factory workers, the Fiat 1100, merry-go-rounds, and suburban dance bands. Local jazzers were keen, but way behind the USA. Franco Cerri recalled,

We should go back to the end of the war in 1945. We were playing for Radio Tevere, which had to sound like a Roman programme even though it was made in Milan—there was fascist propaganda at one end of the studio, with our group Smeraldo at the other.

This was the world onto which exploded the divine druggie Chet—so “cool” that deep down he envied Cerri his little apartment and his Fiat 1100!

In 1975, when Paola was 17, she went to hear Chet at the Umbria jazz festival. Later she played recorder and cello in the early music scene in north Italy, going on to devote herself to jazz, teaching, and her funky string quartet, always exploring. In 2007 she wrote a thesis on Chet in Milan. Paola’s brother Fabio, a flautist, is also active as a writer on music and organizer of contemporary music in Verona.

Of all Chet’s disciples around the world, it was surely in Italy that l’angelo maledetto was most idolized.

Whereas Miles fell in love with Europe (particularly Paris and Juliette Greco), for Chet Europe seems never to have been much more than a useful source of drugs. His tours read mainly as a squalid litany of dodgy dealers, dope busts, and duplicity. But it’s worth noting the many fine local jazzers who worked with him on his European tours—in what were often trying circumstances.

While I’m adjusting our focus on the American scene, it’s worth mentioning jazz behind the Iron Curtain, like Tomasz Stańko in Poland—where the counter-cultural message of jazz felt still more significant (cf. punk in the GDR).

By 1959 audiences were drawn to l‘angelo like a moth to a flame. He took a role in the film Urlatori alla sbarra:

For all his romantic image, Chet was truculent and prone to tantrums, as he smuggled in pills, checked briefly into rehab, blagging dodgy prescriptions, and alienating his most devoted followers. He had a devoted following in Lucca, home of Puccini. He was finally busted there in summer 1960, languishing [as you do—Ed.] in jail until his trial in April 1961, where he received a rather light sentence. 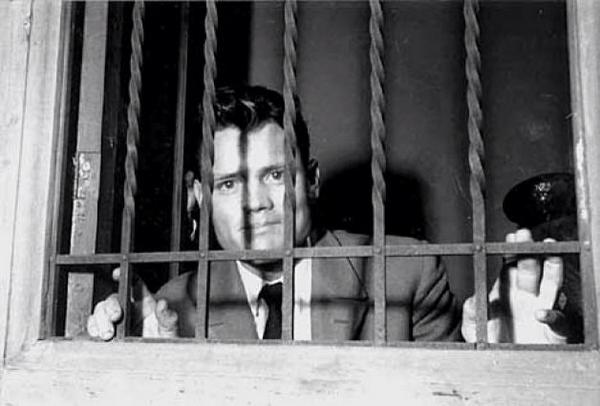 Another romantic image now emerged as the tones of his angelic trumpet wafted from behind the prison walls. He was released early in December, even managing not to get deported. He resumed touring; briefly drug-free after his release, he soon resumed the habit. Meanwhile other jazzers kept dying (Deep in a dream, pp.153–83—sordid and depressing as the book is, it’s brilliant, do read it!).

The Rimbaud of jazz, often defeated but every time rising … the sweet and fragile boy grown in the slums of New York [sic!] … a bird whose wings are always broken, the defenseless victim of every violence in the wild city.

Always running from the law, he spent summer 1976 in Rome, doing another troubled gig there in 1978. Through the 1980s he did further tours of Italy for adoring audiences, spreading chaos all around his circle. His last gigs in Rome in 1988 were punctuated by street busking to pay off his dealer. By May he lay dead on an Amsterdam pavement; the only mystery about his death was its circumstances.

But again, utterly dysfunctional as Chet’s life was, the tracks are mesmerizing. For Paola’s thesis she interviewed Renato Sellani and Franco Cerri, who appeared with Chet Baker in Milan in 1959. This is their version of My old flame:

And don’t forget the 1959 video of My funny Valentine, which I already featured.

So here’s a fine selection from Paola:

Indian Summer (Milan, again from 1959)—Paola: with a long, sweet, elegant solo that I LOVE)

Well you needn’t (a boppy version of the famous Monk standard):

These foolish things (whose lyrics Eric Maschwitz wrote as a love song to Anna May Wong!), with René Thomas on guitar:

Here I can’t resist playing two versions by Billie Holiday too—first from 1936, before the literal shot in the arm of the 1940s:

Back to Paola’s playlist—Autumn Leaves, with Paul Desmond on sax:

There will never be another you (Chet’s first solo here is a classic study piece for jazz trumpeters):

Paola’s selection is based on Chet’s genius as a trumpeter, but she also led me to another searingly intense sung ballad live on video, Almost Blue (also featured in the Let’s get lost film). While he was eminently capable of sounding befuddled and morose, this is on a par with his heart-rending My funny Valentine. His cover of an Elvis Costello song inspired by Chet’s The thrill is gone, it’s a late version from 1987, not long before his death:

There’s another, longer, version in his amazing Tokyo set, also from 1987:

If only I could have shared all these ballads with Natasha.

Listening to these late gigs, perhaps I was wrong to conclude:

Whereas most of the jazz greats, through their similar struggles with addiction, were constantly learning, honing their craft, Chet seems to have been gifted with his dreamy cool style very early, and then traded on his angelic image (largely for substances) for the rest of his surprisingly long life, settling for melancholy—without the constant explorations of the other great jazzers.

Even with those standards that he’d been playing year in, year out since the 1950s, he couldn’t help exploring, both in melodic invention and in the depth of his pain.

I often observe that notation is overestimated; still, many jazzers were obsessed with chord sequences, and often consulted scores. There’s discussion (e.g. here) of how familiar Chet was with theory and notation. As Gerry Mulligan observed, “Chet can read, but he doesn’t have to.” Anyway, his sense of harmonic melody was largely aural.

Chet appeared less often in England, but late in his life he was in fine form for a week at The Canteen in London in March 1983. His 1986 appearance at Ronnie Scotts, with Elvis Costello, was also great:

To think that I could have been there… 1986 was my first stay in China, but I now add this to the list of great gigs that I kick myself for missing—Amy Winehouse, Tennstedt doing Mahler, and so on.

Lastly, another of my favourite ballads, Time after time—the 1954 recording:

13 thoughts on “Chet in Italy”