For Nick—
if the reader finds this post a tad arcane, just wait till you see his WAM anagrams…

Further to my little Lisbon jaunt, I’m always disappointed at my total lack of success when I try to busk it in Spanish by randomly adapting Italian—but it’s even more futile to further modify my crap Spanish into bacalhau (sorry, I mean cod) [1] Portuguese.

I soon dispensed with my old Portuguese phrase book (less entertaining, and less sinister, than Teach yourself Japanese)—its very opening phrase suggests a similar deep anxiety about even setting foot outside our own green and pleasant land:

There’s been an accident.

I flew TAP (Take a Parachute). Indeed, the flight prefix is further abbreviated by omitting the middle letter, so not for the only time, I found myself flying TP (Totally Pissed).

Aboard TAP flights, with impressive urbanity in the vein of Mots d’heures, the airline regales the traveller with a pithy and somewhat obscure epigram evoking the saudade of fado. It seems to recall a sad incident in the colourful past of an early Lisbon femme fatale, perhaps a widow of French patrician stock (even a refugee from the guillotine?):

I’ve added capitals for clarity, but in order to preserve the ambiguity of the original I have refrained from supplying what seems to be a missing apostrophe—indeed, could it even be an exhortation?

Either way, it is far more evocative in Portuguese than in its prosaic English rendition

Life jacket under the seat. 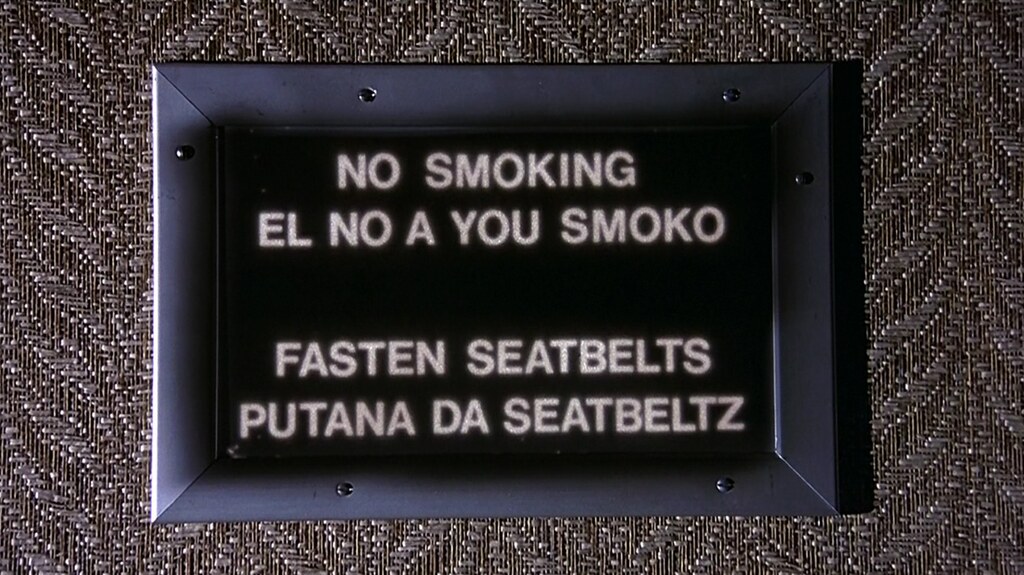 Airplane is packed with little visual detail like that, requiring as much long-term revisiting as the Ring Cycle. Even the opening sequence is a too, er, deaf ‘orse.

also commemorated in TAP’s onboard annotations. Again, their names are so much less elegant in English:

For a new addition to the family, Proxima Paragem, see here.

Just had one of those wacky dreams:

In Lisbon, invited implausibly to some suspiciously traditional social event with an old friend, we make our tortuous way there by means of a badly bombed Escher staircase. Arriving unscathed, I mingle suavely with the locals. Pleased with myself for managing to utter a grammatically convincing phase, I exclaim “Progresso!” “Si,” my Portuguese friend nods, “Esta Truro.”

How pitilessly my subconscious satirises my naïve aspirations to insider status.

For another dream, and a Portuguese limerick, see Ogonek and Til.

[1] Altogether Now: The Piece of Cod Which Passeth All Understanding.

13 thoughts on “Some Portuguese epigrams”